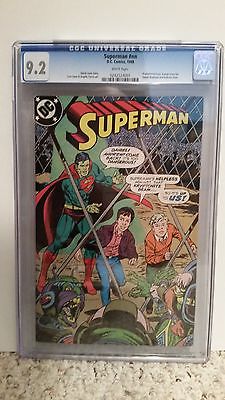 This is from my personal collection. If you're viewing this, you know exactly what it is. This has a very high 9.2 grade. I will ship to the purchaser with full insurance and signature will be required due to the value. I will ship via USPS Priority Mail, and I ship the same or next business day. Description is below...
Taken from recalledcomics.com:
This comic was commissioned by English property tycoon Godfrey Bradman for somewhere around Â£10,000 (around $18,000 back then) to celebrate his son Daniel's 13th birthday (Bar Mitzvah) and was given out to his friends to mark the occasion. The comic was written by David Levin and drawn by the legendary Curt Swan with inking from Angelo Torres, who helped capture the likenesses of the Bradman family.
The comic features Godfrey's son Daniel and Andrew Hunt (Daniel's half-brother), along with the rest of the family, in a story entitled "This Island Bradman" where both Superman and the Bradman's house are transported to an alien world to serve as entertainment. Superman is trapped inside the bubble containing the house by Kryptonite beams but the boys manage to escape through an air duct and free Superman who returns them all home.
It is not clear exactly how many copies were produced and figures of anything between 25 and 250 have been suggested. 100 seems to be the number quoted most widely as the number received by the family, including one source from within DC Comics and also from a previous owner of one of the comics who had been close to the Bradman family. However, it has been noted that a number of copies were kept by DC and distributed internally (some of which have come up sale) and in Paul Levitz's "75 Years of DC Comics: The Art of Modern Mythmaking" 200 is quoted as the print run so this number seems to have some legitimacy.
Thanks for looking.