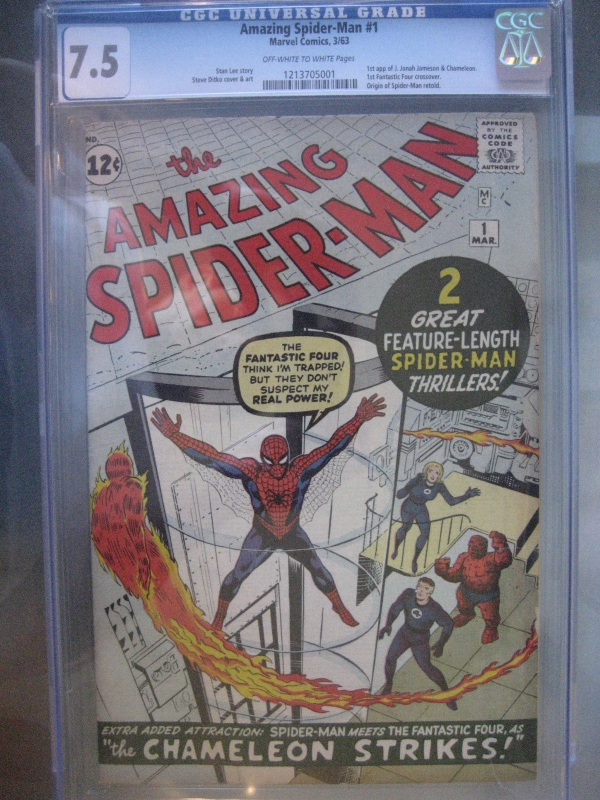 
"Spider-Man" With the Parker household desperate for money following the death of Ben Parker, Peter Parker decides to continue in show business as Spider-Man. However, not only does he find it impossible to cash his paycheck (made out to Spider-Man), but the irrational editorials by J. Jonah Jameson in the Daily Bugle effectively quelch his career. Besides denouncing Spider-Man as a publicity-seeking phony, J. Jonah Jameson also publishes articles lauding his son, John Jameson, a courageous astronaut about to be launched into orbit in a space capsule. J. Jonah Jameson calls his son a "real hero." The day of the launch finds Peter Parker at the launch site as an observer. The rocket takes off successfully, but a guidance system error causes it to go wildly off course and re-enter the atmosphere. Spider-Man appears at the launch site and offers to replace the defective 24-3B guidance unit in the plunging capsule with a spare. Because there is no way for the military to get to the capsule in time, they allow Spider-Man to try. Spider-Man commandeers an aircraft and pilot, and together they fly toward the space capsule's re-entry point. Although the capsule is falling fast, Spider-Man manages to get hold of it with his webbing and climbs aboard. He quickly replaces the faulty guidance unit. As a result, John Jameson regains control of the capsule, gets it properly oriented, and opens its parachute. To the joy of all concerned, the astronaut is saved. Thinking that Spider-Man has at last proved himself, Peter Parker is shocked when he reads J. Jonah Jameson's editorial in the next edition of the Daily Bugle. Spider-Man is accused of deliberately sabotaging the space capsule and staging the rescue as a publicity stunt. With public opinion turning against Spider-Man with each new editorial in the Daily Bugle, Peter Parker's position is as hopeless as ever.

"Spider-Man Vs. the Chameleon!" Still looking for a way to use his powers to make money, Spider-Man decides to try and join the Fantastic Four. He enters the Baxter Building, escapes a "plexi-glass cage" trap, and battles the four heroes. After explaining his intentions, he learns that the Fantastic Four are a non-profit organization and earn no salaries. He leaves disappointed, vowing to make the group "look like pikers." Meanwhile, the Chameleon is using his "multi-pocket disguise vest" to infiltrate a defense installation in the Lark Building at the edge of New York City. Later that night, while mulling over the defense plans he has stolen, he hears about Spider-Man's visit to the Fantastic Four's headquarters. He deduces that Spider-Man has no legitimate way to earn a living and must be short of money. He once more infiltrates the defense installation, and, disguised as Spider-Man, steals the remainder of the missile defense plans. Spider-Man, who had been contacted with a phony job offer by the Chameleon on a special frequency that only his Spider Sense can pick up, arrives at the defense installation just after the Chameleon's departure. The security guards try to capture him, thinking he has stolen the plans. Evading capture, Spider-Man uses his elastic webbing to sling himself out over the harbor, then spins a web parachute to land safely. He grabs a boat and follows the Chameleon's helicopter to a waiting Soviet submarine. He quickly gains control of the helicopter, and he and the Chameleon return to the Lark Building. The Chameleon disguises himself as one of the security guards to avoid arrest, but after a brief battle he is captured. Unfortunately, during the battle the guards believe that Spider-Man is the Chameleon in disguise, forcing Spider-Man to flee. He departs, rueful of the way things never seem to turn out right.

I hope they find that horrible Spider-Man and lock him up before he can do any harm!


Please Be Sure To Check Out My Ebay Store!  Free Registered Shipping with Full Insurance!

Please allow 7-10 business days for Registered Shipping (Safest method of shipping).  CGC/PGX Comics will be shipped padded in Priority Box or the like.  International shipping will vary.  Payment is expected within 5 days.  Thanks for peeking!