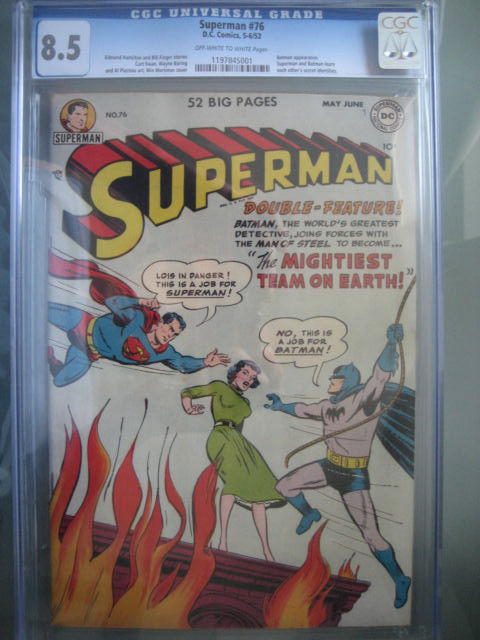 "The Mightiest Team in the World" After Batman and Robin work together to capture Gell, the last criminal on Gotham City's most wanted list, they turn him over to Commissioner Gordon. With no crime in Gotham for the time being, Robin decides to go visit some of his relatives upstate leaving Batman to his own devices for a little while, as Bruce Wayne, Batman decides to take a cruise. While in Metropolis, Superman delivers some fossils he dug out of the Gobi desert for the Metropolis Hall of Learning. Switching to his civilian guise of Clark Kent and going on a date with Lois Lane. Lois offers to see Clark off on his vacation aboard the cruise ship Varania. Boarding the ship, Clark is shocked to learn that due to overcrowding he is forced to share his room with someone else and is introduced to his bunk mate: Bruce Wayne. As both men are introduced to each other, both men worry about the other learning their secret identity unaware that both men are the super-heroes Superman and Batman. While out on the docks, a man fires a incendiary bullet at a fuel truck causing a massive blaze to cover his escape with stolen diamonds. Witnessing this, Bruce kills the lights hoping the cover of darkness will allow him to change into Batman unobserved. Clark had the same idea and changes into Superman, and upon the two trying to rush off to stop the crook realize their secret identities. Witnessing Lois Lane caught in the blaze, Batman swings down to rescue her while Superman goes to douse the flames. Upon investigating the crime scene, the two heroes deduce that whoever stole the diamonds might be trying to escape aboard Varania. They agree to keep their identities secret and work together to catch the crook. Getting permission to operate aboard the vessel as Batman and Superman, the two heroes find that their mission has been complicated by Lois Lane, who has gotten permission to take her vacation early so that she can cover the story for the Daily Planet. Needing an excuse to explain Clark Kent's absence while Superman and Batman are aboard the ship, the two heroes quickly return to their cabin and switch to their civilian guises where Clark pretends to be terribly sea-sick until a disgusted Lois Lane storms out on him. Returning to their costumed identities, the two heroes agree they must come up with a way to keep Lois Lane out of their hair. Superman comes up with an idea to pretend like he is jealous of attention Lois is showing toward Batman, unaware that Lois has been overhearing this plan and has decided to make things difficult for the two heroes. While the two keep Lois occupied, they begin deducing who is behind the theft and determine that John Smilter is the likely suspect. Sure enough, when Smilter believes that Superman and Batman are too busy vying for Lois's affections, he tries to make an escape in helicopter. With is cover lifted, Batman and Superman easily capture the crooks involved and turn them over to the authorities when the ship briefly docks. With their mission accomplished Batman and Superman "leave" so that they can resume their civilian identities. However, Clark's "miraculous" recovery from sea sickness just after Superman and Batman's departure tips Lois off to the possibility that Clark Kent and Bruce Wayne are secretly Superman and Batman. Quickly thinking, that night Superman flies Batman off to Gotham City to bust a crime so that when they return to the ship to meet with Lois for supper as Clark and Bruce, Lois hears a radio report of Batman's exploits, thus preserving his identity. When the ship finally docks at the end of it's voyage, Bruce disguises himself as Clark Kent as the real Clark greets Lois at the port, protecting Superman's identity. Later, when back in town, Batman and Superman are shocked to see that Lois Lane has accepted a date from Robin.


Please Be Sure To Check Out My Ebay Store!  Free Priority Shipping with Signature Confirmation!
CGC Comics will be shipped padded in Priority Box or similar.  International shipping will vary.  Payment is expected within 5 days.  Thanks for peeking!