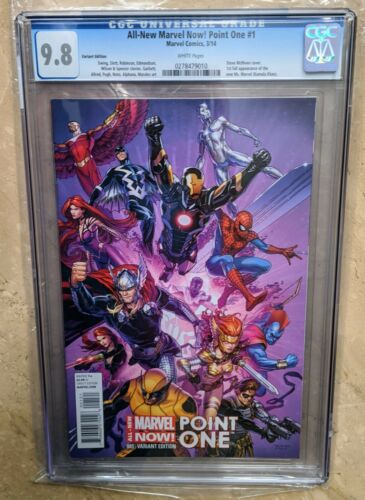 This book is one of the most rare and sought after key appearances of a modern character. While Kamala Khan had a cameo appearance in the Captain Marvel series, this book marks her first full appearance as designated on the CGC label. If a retailer wanted to get their hands on this book, they had to order 75 copies of the regular version which already had a low print run at around 30,000. Because most stores didn’t order 75 copies, these variants are about as rare as they come with only 13 copies in 9.8 on the CGC Census with only 56 total. Insane. One of the 13 sold just recently for $5000. With Kamala Khan entering the MCU through the Ms Marvel series on Disney +, this book could take off a la Mile Morales. Kamala is the first mainstream Muslim Superhero, so you can imagine the fan base. Here is your chance to grab one before they disappear into private collections. All-New Marvel Now Point One #1 CGC 9.8 1:75 McNiven Variant 1st Kamala Khan.
Shipped securely with USPS Priority Mail.