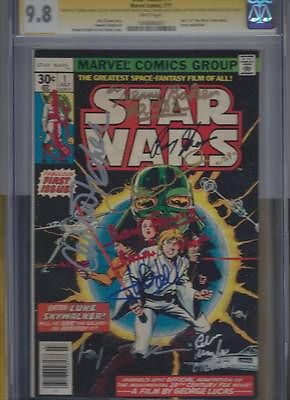 Up for sale is this AMAZING cast signed issue of STAR WARS #1 from 1977. It is signed by 7 cast members, many of which have also written in their characters as noted below, and by two Marvel Comics contributors. Mark Hamill (Luke Skywalker) signed in BlueCarrie Fisher (Princess Leia) signed in SilverDavid Prowse (Darth Vader) David wrote in Red David Prowse is Darth Vader which makes his sig that much more AWESOMEAnthony Daniels (C-3PO) Anthony added C-3PO under his name in GoldKenny Baker (R2-D2) Kenny added R2-D2 under his name is GoldPeter Mayhew (Chewbacca) Peter added Chewbacca under his name in SilverJeremy Bullock (Boba Fett) signed in RedHoward Chaykin (Marvel Artist cover and interiors) signed in SilverRoy Thomas (Marvel writer) signed in BlackThis is a very rare book with many signatures, 9 in all, not to mentioned it's a CGC 9.8. The movie is coming soon as I'm sure you know.