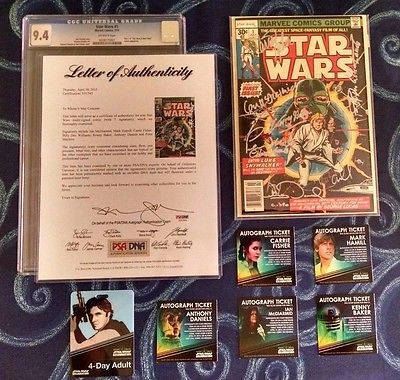 First off, thanks for looking at my auction. :)
HISTORY & CONDITION
For sale is my #1 Star Wars Marvel Comic from 1977.
This item was originally in a CGC jewel case and rated 9.4.
I brought it with me to the Star Wars Celebration in Anaheim last April (2015)
It was removed from itâ€™s case in order to be autographed by the Star Wars cast.
The comic is still in itâ€™s 9+ condition. Cover/pages are in off-white condition.
There are no rips, tears, or stains.
The only exception, is that there is some residual glitter in the pages,
from Carrie Fisherâ€¦ who glittered everyone that got a signature from her.  :)

The comic is bagged in an E.Gerber MyLites2 Mylar bag and backing board (UV and archival quality storage).
SIGNATURES
The signatures were done in silver Sharpie and are very, very crisp and sharp.
The signatures on the comic are:
1. Carrie Fisher - Princess Leia
2. Ian McDermid - Emperor Palapatine
3. Kenny Baker - R2D2
4. Peter Mayhew - Chewbacca
5. Anthony Daniels - C3PO
6. Mark Hamill - Luke Skywalker
7. Billy Dee Williams - Lando Calrissian
To authenticate the signatures, I have included three sets of providence (proof):
1. Certificate of Authenticity from PSA/DNA, they were on-site at the Celebration Convention. The COA covers ALL 7 signatures on the comic. BONUS: If you are a fan of the History Channel's "Pawn Stars", the signature on the COA - that's Steve Grad. He authenticated this comic at the event and is also a BIG Star Wars fan too.
2. Autograph hall stubs for Hamill, Fisher, Daniels, Baker, and McDermid (there were no stubs for Williams or Mayhew) - from Official Pix (they managed the autograph hall at the event, you had to buy a ticket from them to get in an autograph line).  I will also include my original receipt from Official Pix (not pictured).
3. Star Wars Celebration Adult Pass - this is my personal 3 day adult pass to the event. You couldn't get into the autograph hall or the event without it.
You will get everything pictured.
WHY BUY THIS COMIC?
Although a number of the original Star Wars cast are available for signings, getting to them would be a bit of work. For example, Anthony Daniels and Kenny Baker do not have any more scheduled signings in the USA for 2015. The next Star Wars celebration is in London for 2016. It will be a zoo as tickets are already selling out. Believe me, there WILL be lines. I stood in line 6 hours at the convention just to get these signatures - and that was on the *slow* day for SWC Anaheim - Thursday. By the weekend, people were in line for that time just for ONE signature and some didn't get signatures at all.
I made sure that each cast member used my silver Sharpie to sign the comic. I believe it just presents better, especially on a dark comic cover like this one.
Although it was awesome to see my childhood heroes in person, some of them looked to be bad shape and poor health. Even if you pass up this comic, I highly suggest you catch Mayhew and Baker as soon as you can if they are on your autograph list.
Since this is a loose comic, it's a wonderful opportunity to own two pieces of history (autograph and comic) that you can frame on a wall. And should you happen to want more signatures on it, there's no stress in cracking open a CGC frame and/or arranging CGC members to witness your autographs. Just bring this comic to a convention, open the bag, and have it signed.
Shipping is FREE by USPS Priority Mail and insured.
Happy to send via Ebay Global Shipping program for international buyers.
Best offers are welcome.
See my other EBAY auctions too for some great Signed Comic and Star Wars stuff!
You are buying from a Star Wars fan.  :)