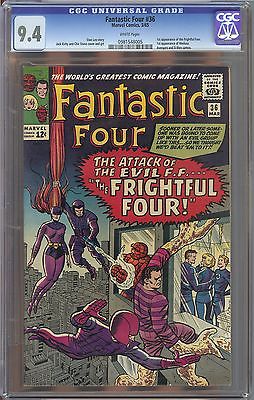 FANTASTIC FOUR
The Fantastic Four is a fictional superhero team appearing in comic books published by Marvel Comics. The group debuted in The Fantastic Four #1 (cover dated Nov. 1961), which helped to usher in a new level of realism in the medium. The Fantastic Four was the first superhero team created by writer-editor Stan Lee and artist/co-plotter Jack Kirby, who developed a collaborative approach to creating comics with this title that they would use from then on. As the first superhero team title produced by Marvel Comics, it formed a cornerstone of the company's 1960s rise from a small division of a publishing company to a pop culture conglomerate. (en.wikipedia.org)

Marvel Comics Group, is an American publisher of comic books and related media. In 2009, The Walt Disney Company acquired Marvel Entertainment, Marvel Worldwide's parent company. Marvel started in 1939 as Timely Publications, and by the early 1950s had generally become known as Atlas Comics. Marvel's modern incarnation dates from 1961, the year that the company launched The Fantastic Four and other superhero titles created by Stan Lee, Jack Kirby, Steve Ditko, and many others.(en.wikipedia.org)

WE STRIVE FOR PERFECT 5 STAR FEEDBACK IF FOR ANY REASON YOU ARE NOT 100% SATISFIED, PLEASE CONTACT US FOR IMMEDIATE RESOLUTION
- We are an authorized CGC Dealer, so buy with confidence!
- Over 20 Years in business means strict grading for Comics and Toys is assured!
- Fast shipping and packed with the extreme care! We are collectors too!
- International Shipping Protection / Buyer Seller Protection
- We offer Combined Shipping. Please wait for an invoice to receive savings.
- Check back often and visit our other listings!?
- Thanks for Looking and Good Luck Bidding!