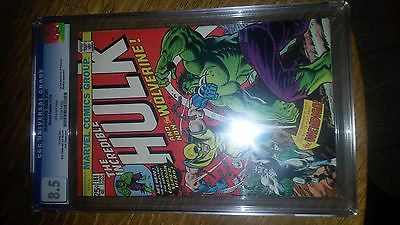 Marvel Incredible Hulk #181 11/74 CGC 8.5 First Full Appearance of Wolverine VF+ Fresh from CGC, no scratches in case, flawless. Check my other Auctions Graded slabbed Silver age and Bronze starting at 1 cent! Get it one while you can, prices have been going up FAST! Â Any copy you can find is a treasure. Â Priority shipping is $10 for the first slab and $5 per slab after. Â  Also insurance if wanted is on you, please request it and send a separate payment. Â All my shipments are packed very well. Â Anything over $200 will need signed for. Â Sometimes I travel during the week for work so I mainly ship on Saturday's. Â I have been on Ebay for 15 years, never had a negative rating. Â If you have an actual problem contact me and I'll try and work with you to make things right. Â Returns are generally not accepted. Â Graded comics are sold by the grade given by the grading company. Â Any comments by me on if they appear better or worse then the grade given are purely subjective. Â Use the provided pictures to judge for yourself and the grade given by the professionals. Â If I somehow ship you the wrong comic or something crazy like that I will make things right. Â I am an honest seller but I am not a push over. Â  If you feel you need more pictures just ask. Â  Also to you scammer's and thieves out there. Â I am armed to the teeth and batshit crazy so for your own safety find someone else. "Hulk doesn't understand. First little man fights Hulk... and now he fights Hulk's enemy? But if Hulk's enemy is little man's enemy... then little man is Hulk's friend!" -- The Hulk The clawed hero Wolverine leaps out from the top of a rocky hill landing between the Hulk and The Wendigo. Scurrying onto the Hulk's back, he begins swiping at him with his diamond-hard Adamantium claws, but even they cannot pierce the Hulk's skin. Realizing that the Wendigo may prove to be an easier target, Wolverine springs over the Hulk's head and launches himself at the Wendigo. His suspicions prove correct, and his claws rake into the woodland creatureâ€™s hide. The Hulk, confused by this sudden turn of events, concludes that the "enemy of my enemy is also my friend", so he assists Wolverine in stopping the Wendigo. The Hulk picks the monster up and smashes him through a grove of trees. Wolverine finishes the job by sinking his claws into the Wendigo's throat. The Wendigo is an immortal creature however, and even this seemingly fatal blow is not enough to kill him. For the time being though, the Wendigo is unconscious. Now Wolverine turns his attention onto the Hulk. The fight is furious, but brief, until two bystanders, Marie Cartier and Georges Baptiste, use chemicals to knock them both out. Marie Cartier prepares once again to conduct an occult ritual that will remove the spirit of the Wendigo from her brother's body, and transpose it onto the Hulk. With the Hulk unconscious, he slowly changes back into Robert Banner. Georges refuses to take part in Marie's plan any longer. Arguing that it was bad enough when she intended on placing the curse on a mindless monster, but now she plans to subject an innocent human being to the curse of the Wendigo. Georges angrily storms off. Marie tries to drag Banner's body back into the cave with the unconscious Wendigo, but Banner awakens and just as quickly turns back into the Hulk. Wolverine revives as well and the two begin fighting once again. Marie flees from the battle and races back into the cave. The Hulk swings a mighty punch, but Wolverine manages to roll just in time so that it is only a glancing blow. The punch is still strong enough to knock him out however. Inside the cave, Marie discovers that Georges has completed her occult ritual. He has transferred the power of the Wendigo out of Paul Cartier's body, and placed it inside his own. As the new Wendigo, the last vestiges of Georges' intellect quickly fade away, but not before he manages to profess his love for Marie Cartier. The Wendigo turns and smashes through a section of cavern wall and runs off into the forest. Paul Cartier is now forever free of the curse of the Wendigo.